Article: You talk, It checks on your laundry? 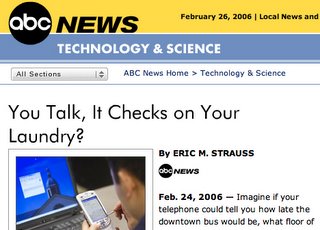 My latest article on ABCNews.com is about speech-embedded smart phones that interact with web servers to return realtime useful information.

I was always puzzled by people lugging their huge suitcases onto airplanes instead of checking it and taking the extra 5 minutes at baggage claim to pick it up on the way out. Now I know why.

AIRLINES & LOST BAGGAGE - An estimated 30 million bags were temporarily lost by airlines in 2005, and 200,000 of those bags were never reunited with their owners, according to an industry report released today. The report by SITA Inc., a company that provides technology solutions for the air transport industry, also noted that "the problem of mishandled baggage is worsening on both sides of the Atlantic." The 30 million misdirected bags comprised only 1 percent of the 3 billion bags processed last year by airports, up from 0.7 percent in 2004, said SITA, which is promoting technology it says would reduce the problem. Last year, mishandled luggage cost world airlines $2.5 billion, compared with $1.6 billion in 2004, SITA said.
Posted by Eric M. Strauss at Monday, February 20, 2006 No comments:

Save the NOLA animals, please.

Two of the more impressive attractions in New Orleans pre-Katrina were the zoo and aquarium. They were very beautiful facilities with educational, environmental, and entertaining programs. Protective open spaces with rare endangered creatures.

They were hit hard by the hurricane, but are coming back strong. For the sake of the economy and the children that live there please consider donating. The aquarium alone employed 700 workers and raised $330 mil a year for the city.

It was one of the few, clean, well run, progressive, educational parts of New Orleans and provided a lot of entertainment and enjoyment for me and my friends when I lived there. I donates and got me a sea turtle!

Are You Ready for some HDTV?

I had the honor of writing a couple tech articles about HDTV leading up to the Super Bowl.

Check them out HERE and some buying advice HERE.