The story of a victim of a senseless violation who was strong enough to survive and composed enough to share her experience and to let it be known that there should be no stigma associated with the wounded.

Charlie Gibson's introduction: "And now, we're going to turn to the story of a young woman, who made a big impression on all of us here at "Primetime." She has an extraordinary story of survival, and we keep asking how did she do it? How did she survive one terrible night at the hands of a crazed attacker. And what happened inside of her? How did she end up concluding that what happened wasn't something to be ashamed of? And how did she decide that women deserve a voice? And how did she find her voice?"

Kelly wanted to take part in the campaign to help fight the sense of social stigma that casts silence over the topic of rape. "There is no way anyone is going to make me feel ashamed of having been raped," Kelly said. "I'm so grateful for the opportunity to participate in TAASA's public awareness campaign."

" I am proud to announce ABC News has been awarded this year’s Robert F. Kennedy Journalism Award in the Domestic Television category for our reporting on foster care, “A Call to Action: Saving Our Children.” This prestigious award is given for the outstanding reporting of the lives and strife of disadvantaged people in the United States." - Phyllis McGrady, Senior VP ABC News

I was part of the team that issued a Call to Action: to examine the US foster care system, and challenged ourselves to ask -- what are we doing wrong, and how can things be better?

It was a rewarding program to produce for and quite an honor for our team to receive. I was able to fly to Washington DC with three of my colleagues to attend the awards reception.

Here is an article about a Kentucky social worker I shot and produced:
http://abcnews.go.com/Primetime/FosterCare/story?id=2021066&page=1

This is a wacky web site where people who are sick report it online. Check it out and see who is sick in your area.
http://whoissick.org/sickness/
Posted by Eric M. Strauss at Thursday, May 24, 2007 No comments: 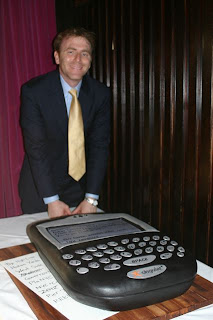 My sister the world famous celebrity baker and author created a completely edible RIM Blackberry made out of cake. Her cakes usually start at $1000, but this one was for her fiance' who is leaving a job at New York's City Hall for the private sector. He will leave his Blackberry behind, but Elisa will still use her old-school Treo :-)

Elisa Strauss on the Today Show