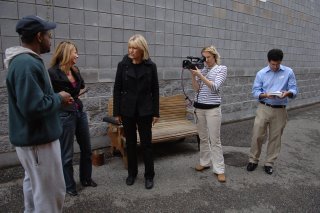 I've been working on a broadcast about Foster Care in America for several months now. I hope you will watch our show Thursday 10pm on ABC.


I've worked on the full broadcast, but specifically the parts in Louisville, KY.

Here is an article about a social worker I spent time with:
http://abcnews.go.com/Primetime/FosterCare/story?id=2021066&page=1


Below is a message from Diane Sawyer on ABC News' special series on foster care, "A Call to Action: Saving Our Children." Watch "Primetime" this Thursday at 10 p.m. ET for Sawyer's report.

During the years that I've been covering this topic, I've met children who were in 11 homes, 18 homes — moved from place to place and then moved again. Even though everyone knows this shatters lives — one study says there's a higher percentage of post traumatic stress disorder among these kids than war veterans.

So what if we made a commitment to stop bouncing kids from home to home to home? What if we asked communities to band together, to find homes, to support damaged families, to help these kids have a better chance for a normal life? What if, instead of lurching from horror story to horror story, we agreed to do what works.

We can change their chances. As adults, former foster care children make up 30 percent of the homeless and 25 percent of the prison population. Children most of all want one constant adult to love in their lives. That's why I've asked ABC News to dedicate the entire division's resources to this issue. We are calling it: A Call to Action: Saving Our Children. We hope you'll watch, and join in.

Diane Sawyer
Posted by Eric M. Strauss at Wednesday, May 31, 2006 No comments: The media (including the men, for psychological reasons involving guilt or other factors best left to Dr. Phil), see men as inviting, politically correct targets. When experts start trumpeting statistics that add up to "men are bad," reporters listen. For years, I heard bad things about deadbeat dads. They were living it up, while their ex-wives and children had to scrape by. It's a recurring story, and the media regurgitates it regularly. It's also group slander.
Posted by Eric M. Strauss at Monday, May 15, 2006 No comments: